Trina Hunts Family offers $50,000 for tips leading to an arrest

If you have any tips, have information, or are covering for the person that murdered Trina - please contact the IHIT Information Line

Trina Hunt's body was found in Hope, BC. We are currently awaiting the results of an investigation.
IHIT (Integrated Homicide Investigation Team) reports that Foul play is suspected
May 1st, 2021

Trina Hunt, was a 48 year old woman living in Port Moody, BC. She was employed by Shaw Communications and had a great rapport with co-workers, many remaining friends after she left to take an early retirement.

She was last seen at 6am on the 18th January 2021 at her home by her husband Iain Hunt. He reported her missing later that day when he returned from work. Police, search and rescue crews, and hundreds of volunteers scoured the area around her Heritage Woods home for weeks, but found nothing.

Her body was found in Hope, BC on March 29 2021, in the same area her and her husband visited in January - her murderer is yet to be brought to justice. 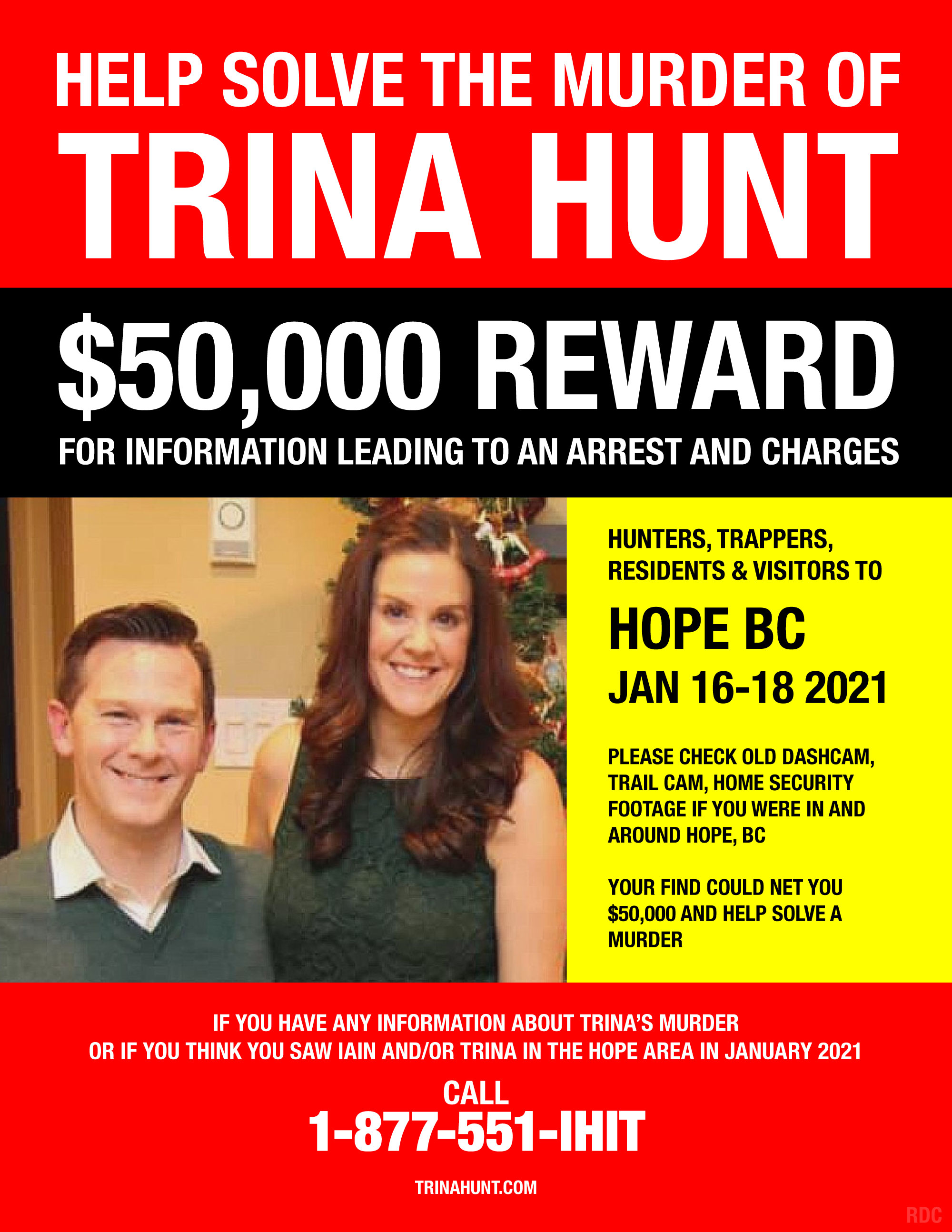 This timeline will be constantly updated as new information is added and verified, and existing information updated.

Trina Hunt is spotted on CCTV footage in the retail community. This is the last known public footage of Trina.

Trina texted with a friend in Ottawa, Canada

Iain said him and Trina drove to HOPE, BC for the day to visit a campground they used to goto when they were younger. January 16th 2021 was cold & icy, with cloud, patches of fog and light showers in Hope, BC (a high of 7c, a low of 1 to 2c) - Iain stated that there were no stops and took the gray BMW rear wheel drive 3 series, despite using Trina's larger AWD Mercedes SUV normally at weekends. He stated that there were no phones due to a "digital detox", and that he was not sure of the time they returned by "back in time for a movie" 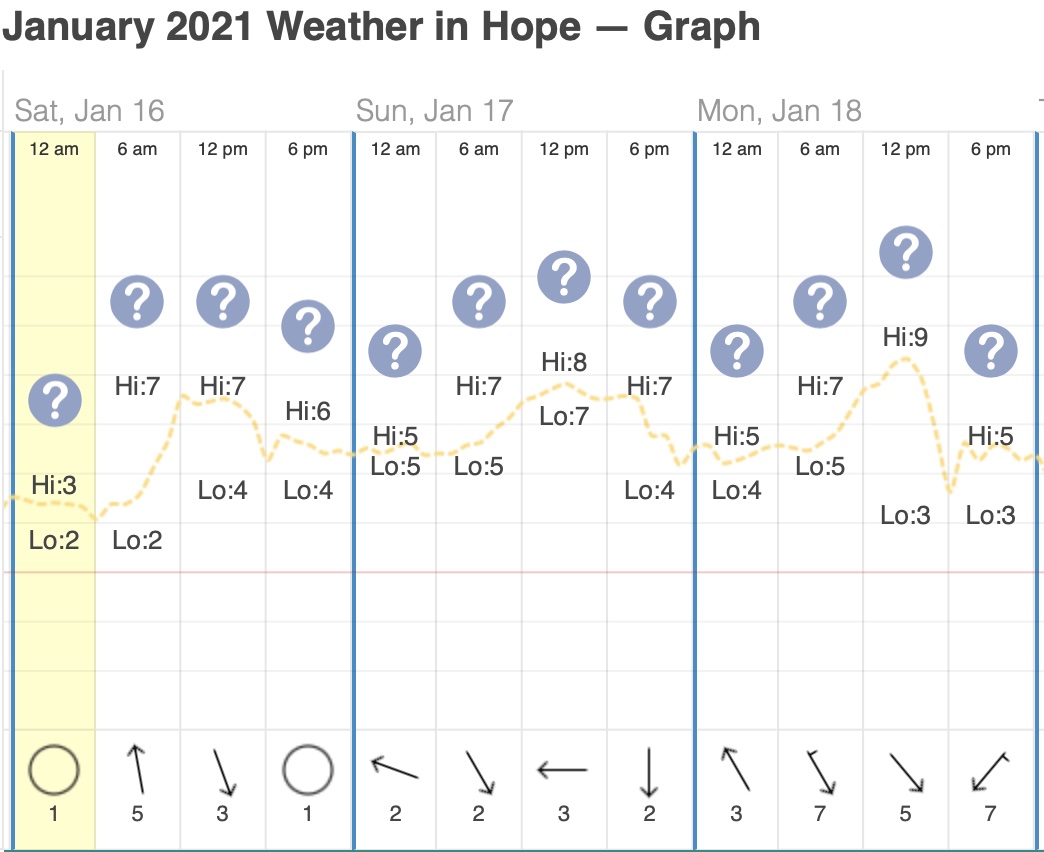 Iain said it was a quiet weekend, when asked about what Iain and Trina did on Sunday, the answer given to family and people who were concerned about Trina, was "vague". As it stands now, no-one really knows what happened Sunday. 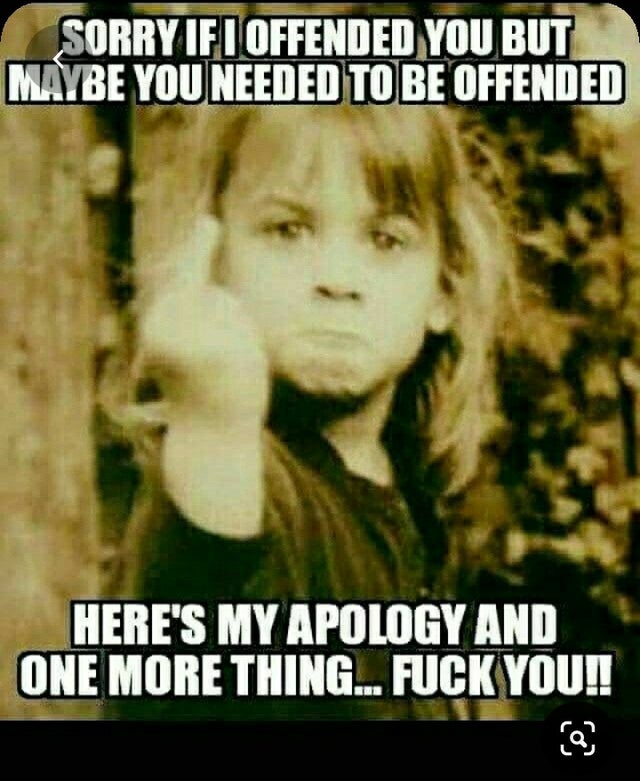 Trina's phone responds to some texts, including that of a former coworker. The writing style and curtness, and lack of emojis was unlike Trina. At 7:19pm a second text replying "Amen!" was sent, Trina had never used that in the past. 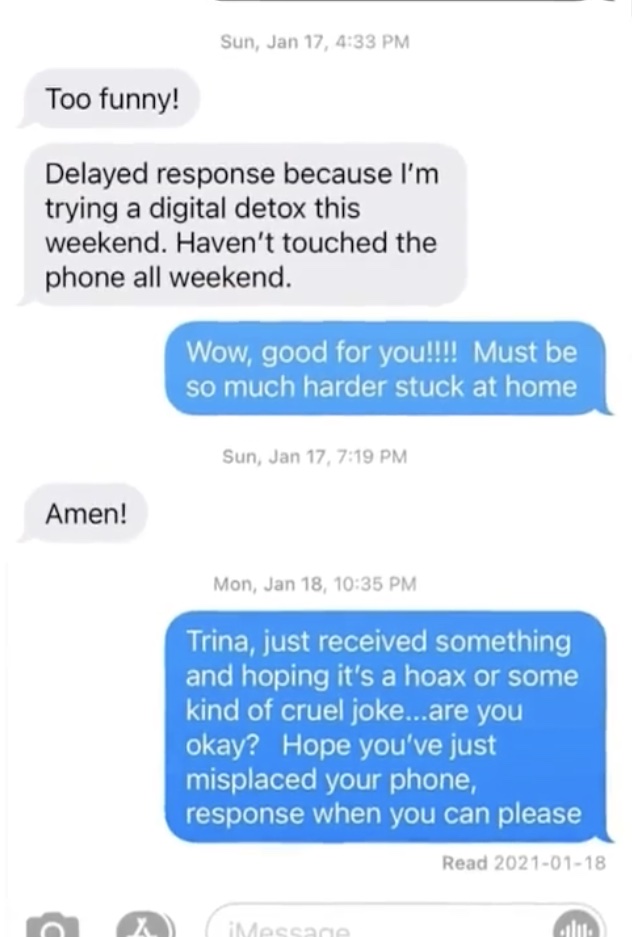 Iain reports he did not set the house alarm that night because he was leaving for work early Monday and didn't want to wake Trina up. In the houses on Hawthorn Drive, the alarm pad is in the hallway, outside of the master bedroom. Un-setting the alarm would cause 2 beeps, but unsetting it and leaving in the morning does not cause any continuous beeping to wake someone. Trina was fastidious about having the security alarm on and windows/doors closed at night

Iain was reportedly the last person to see Trina when he left for work at 6 am. 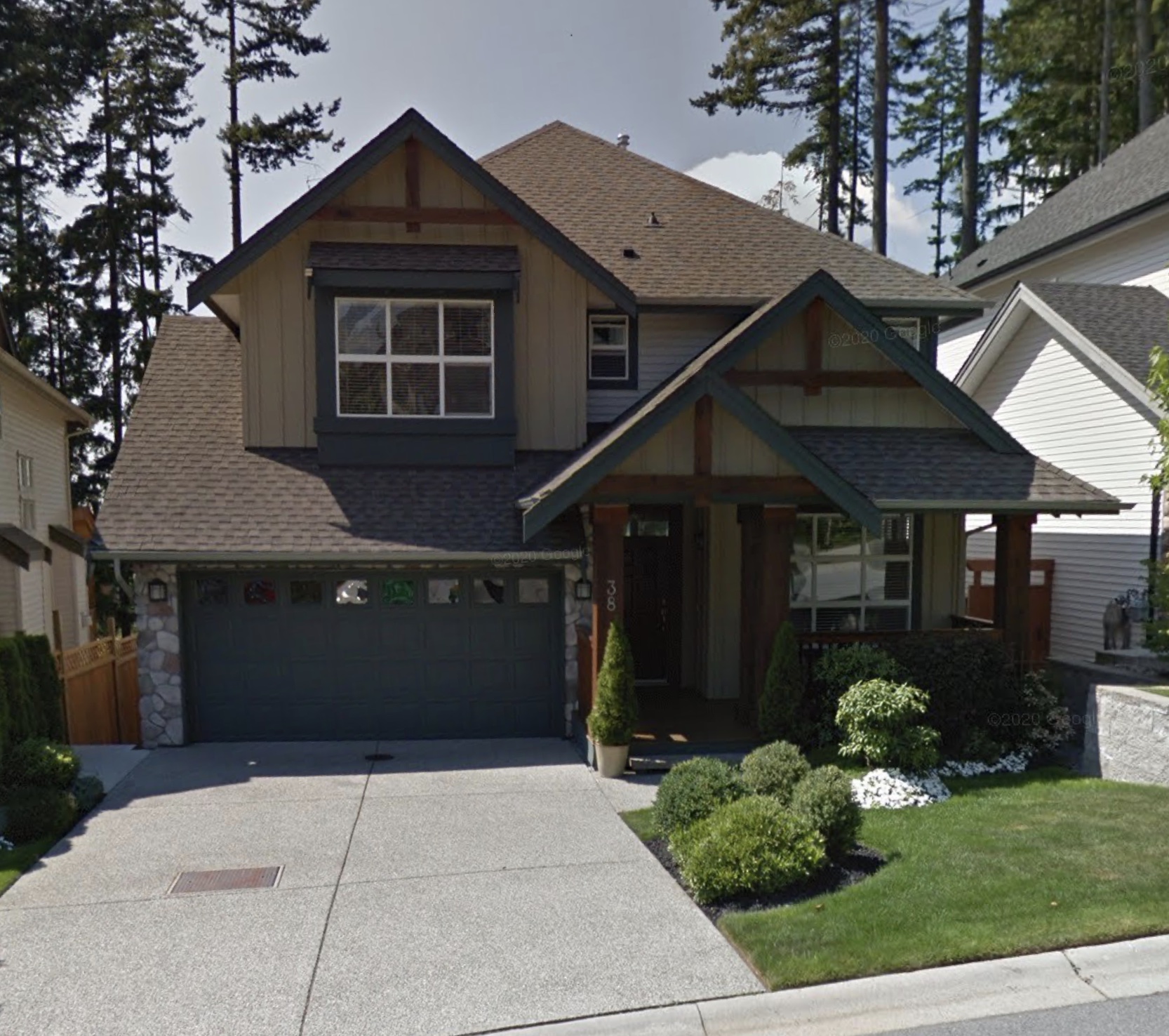 No activity on Trina's mobile phone nor laptop all day

Iain returns home to find Trina's wallet, keys, phone, and car at home, but no Trina. The front door was unlocked, with no visible signs of forced entry.

Port Moody Police canvas the area and begin searching, requesting video footage. Scent dogs were used around the Hunts home, no scent was able to be picked up

Ground search begins by Port Moody Police, Search and Rescue, and numerous community volunteers in and around the Port Moody area. Sg. Ian Morrison confirms an RCMP helicopter and & canine unit have joined the search, and they have a half dozen officers on the case. 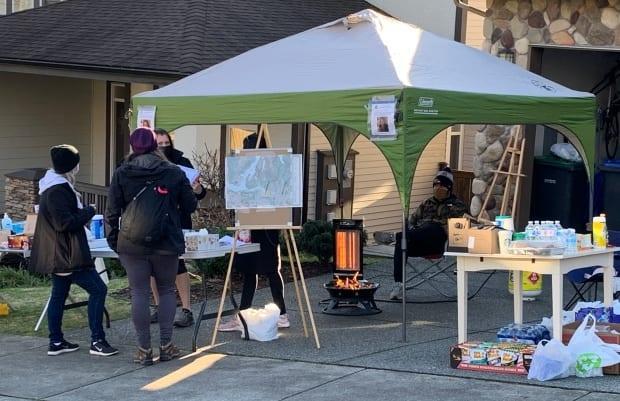 Community search of Heritage Mountain is called off by Port Moody Police. They collect local video footage of the area and encourage more to come forward.

Search & Rescue & K-9 Units continued to scour the local area for any signs of Trina. They were deployed several times over the next couple of weeks

Port Moody Police issue a formal news release. It states, "Numerous investigative resources have been utilized in our search for Trina including RCMP Air Services, Coquitlam Search and Rescue, the Vancouver Police Marine Unit, and the Lower Mainland Integrated Police Dog Service." It also includes the following on IHIT's involvement: "We have also contacted our partners at the Integrated Homicide Investigation Team (IHIT), as part of that team's mandate is to investigate suspicious missing person cases where foul play is suspected. At this time, evidence indicates that this missing person case does not meet IHIT's mandate."

Port Moody Police Chief Fleugal says in an interview with News1130 that, "…we've come to the conclusion that IHIT can no longer continue to assist us, because we don't have any evidence of foul play." Chief Fleugal goes on to state that, "Our minds are open, absolutely to all possibilities," and "We did have a lot of people on this case over the last month. We called out our major crimes section initially, the very first day — we believed it was serious enough to call out our higher trained detectives." When asked about his confidence that "this will actually be solved", Fleugal says "I am confident that we are going to make some inroads…"

A GoFundMe page was setup to help assist with finding Trina: GoFundMe Page currently at $22,285

Large Banner and appeal by family and friends at major road overpass in Port Moody, Iain did not attend, but a statement from him was read:

"The past six weeks since Trina's disappearance have been a devastating and incredibly difficult time for me and everyone who knows my wife. I feel the same frustration and incomprehension that her parents, family, and friends share, in not knowing what has happened to Trina. I am confident the police are doing all they can to solve this case, and I am hopeful that they will bring Trina home." 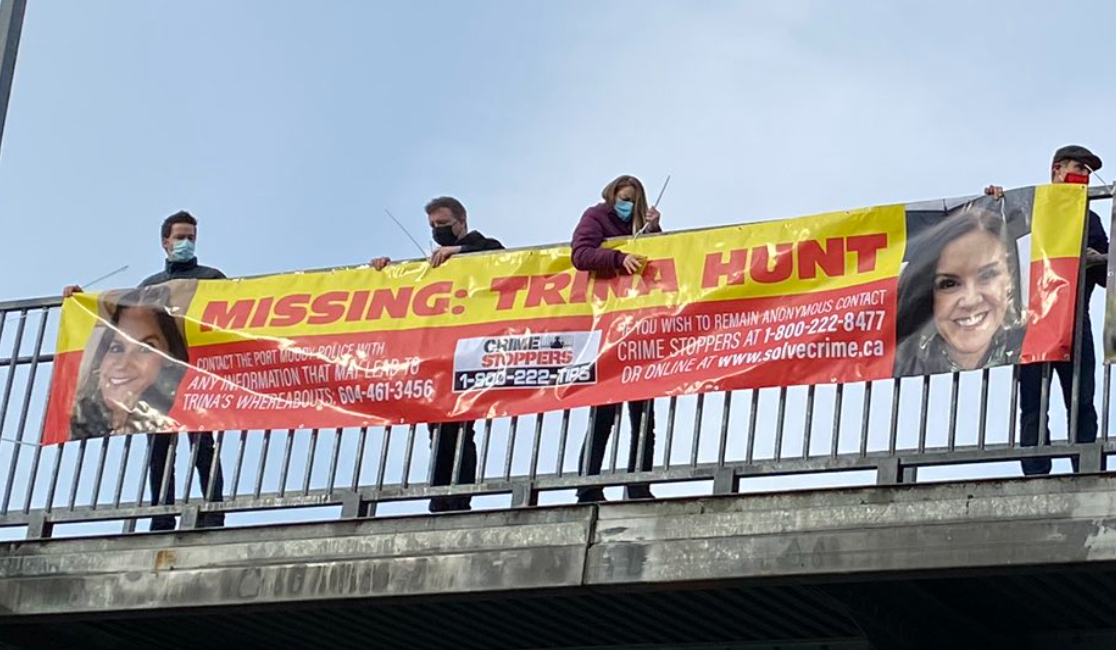 Iains employment as CEO (Jan 2013 - Mar 2021) at CleanTech Service Group was terminated today for unknown reasons - Iain reporting he is taking a "sabbatical". CleanTech services scrubs all photos and mention of Iain Hunt from their website and social media channels 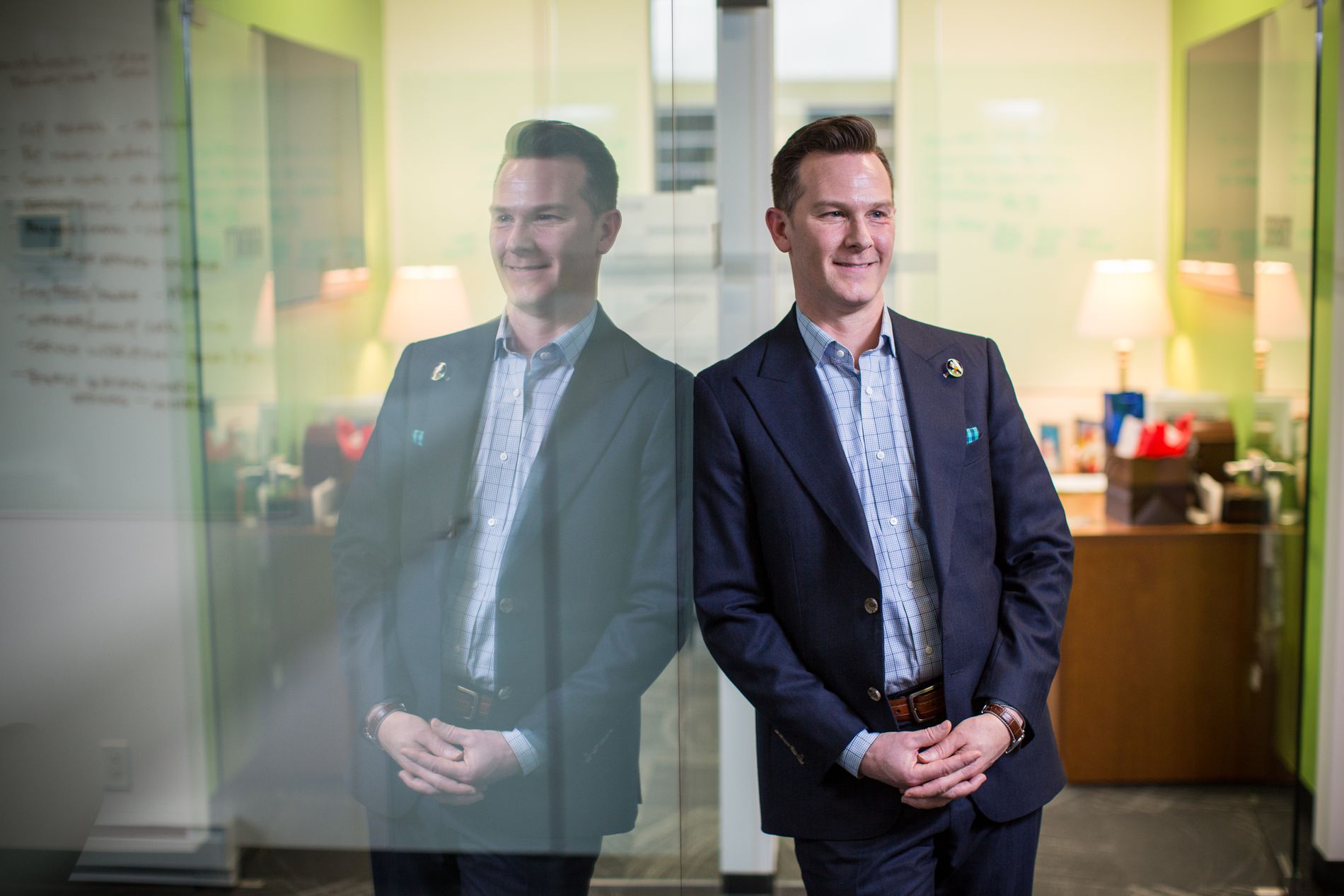 The first of 3 human remains are found and reported at 10am (2 found in Hope, BC & 1 in Mission where Iains parents live and he currently resides) - Remains confirmed to not be April Parisian. On April 19th, Jordan Naterer was ruled out and confirmation IHIT has identified the remains but no other information forthcoming. https://www.hopestandard.com/news/human-remains-discovered-in-hope-ihit/

Iain leaves family home in the afternoon and moves to parents home in Mission, BC for a number of weeks

2nd set of human remains found in Hope, BC 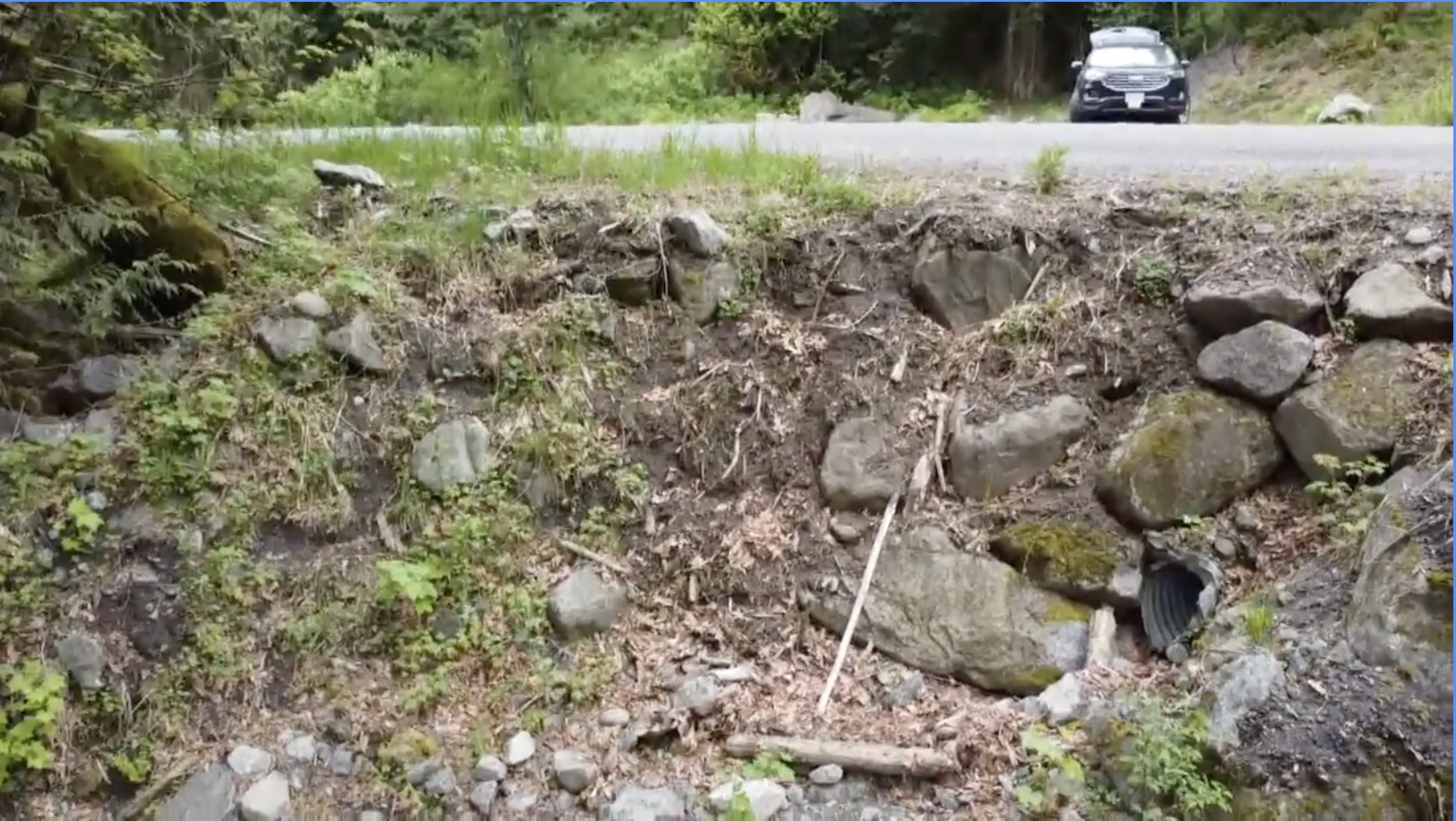 Both Parisian and Bell families confirm that they'd spoken to RCMP who say that remains are unlikely their loved ones.

A marked Coquitlam RCMP was at the Hunt's home from before 12pm to 2pm, another detectives vehicle was further up. Iain was reportedly not at home 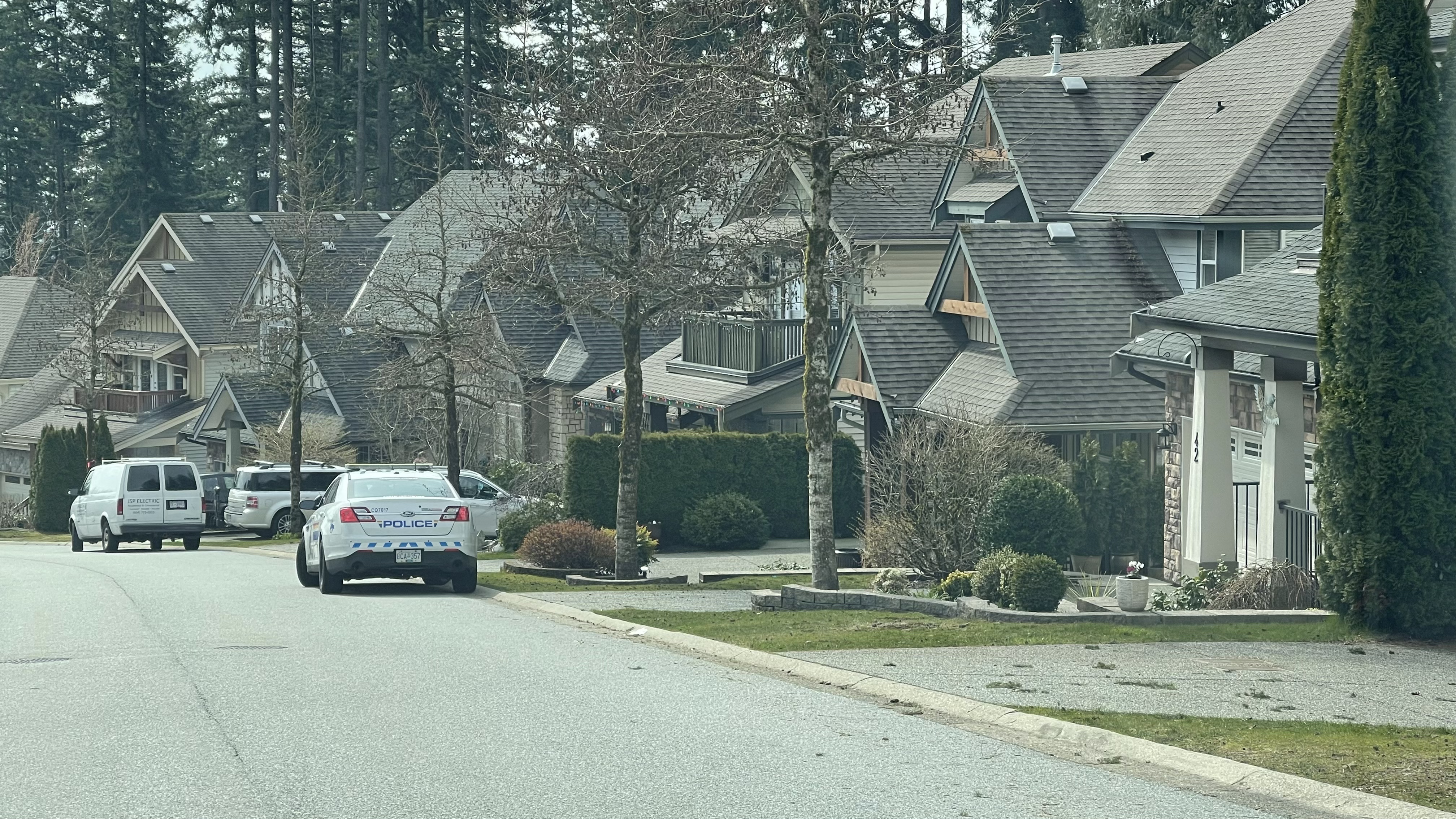 3rd set of remains found in Mission BC. These were identified on May 1st, 2021 to belong to Brandon Sakebow, aged 23, from Saskatchewan.

Candlelight vigil for Trina held by family and friends at Rocky Point park in BC, Iain did not attend
https://www.youtube.com/watch?v=O0I8pkWKQkw&feature=youtu.be 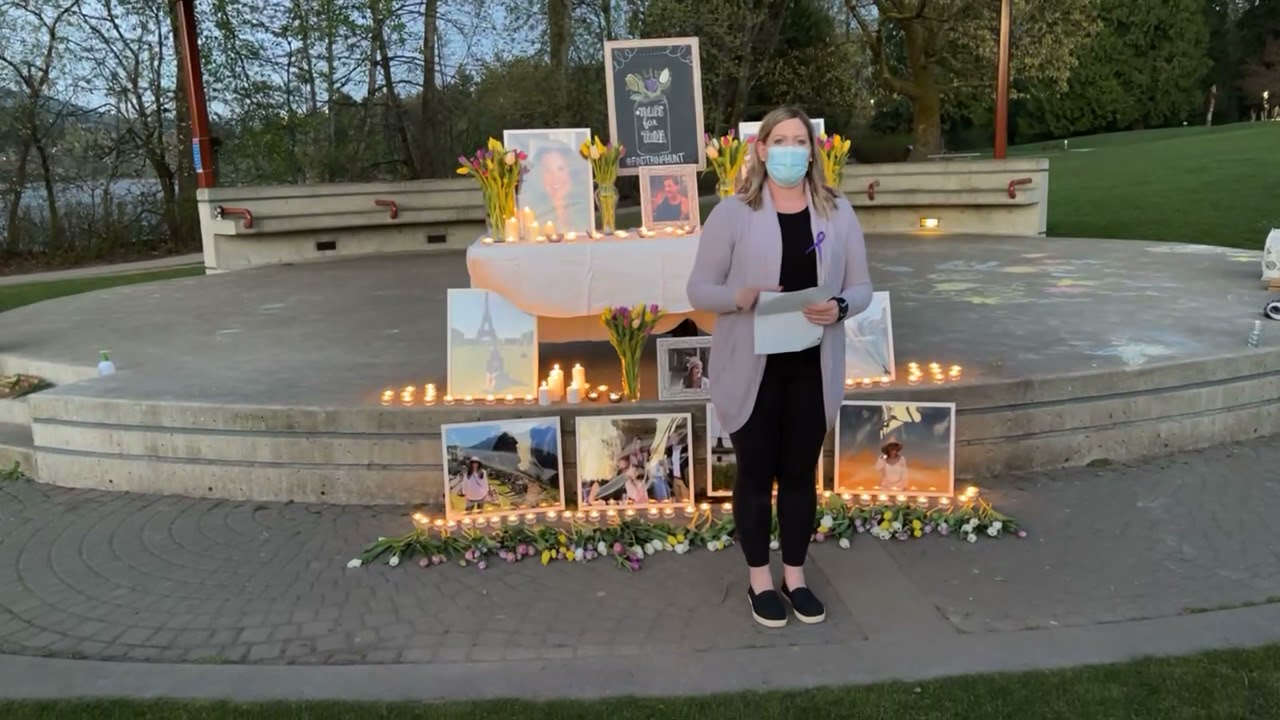 From an investigation into the humans remains found in Hope, BC, Jordan Naterer was ruled out, IHIT has identified the remains but no other information forthcoming

A new poster was designed and distributed (above), with updated information and put up everywhere from Vancouver to Hope, to help maintain momentum and her in peoples hearts and minds 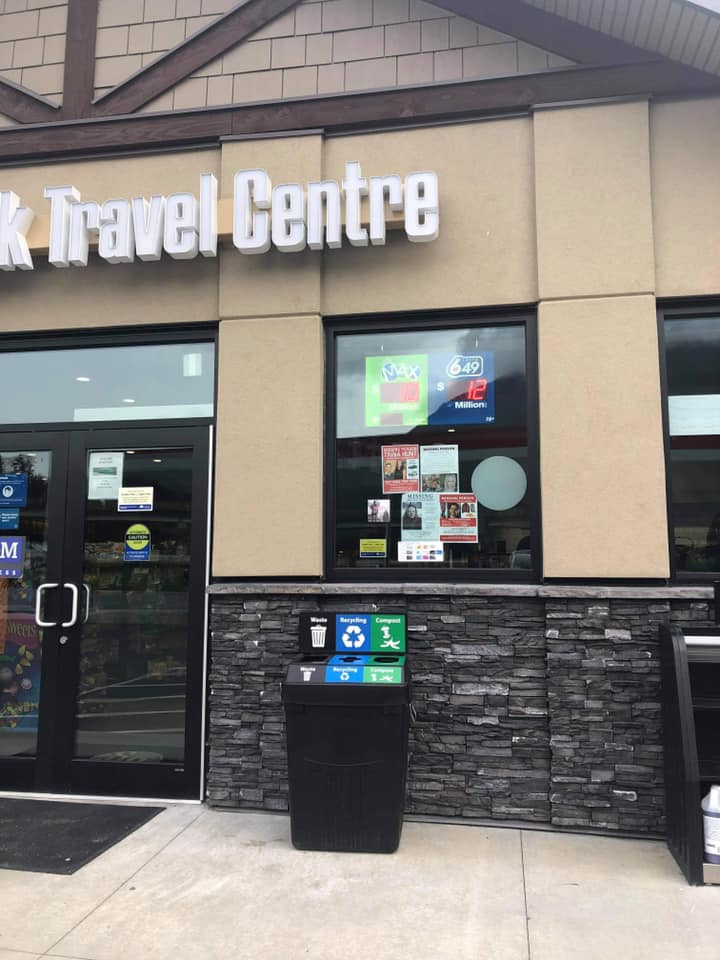 Neighbours see Iain Hunt for the afternoon at the family home after being away for nearly a month. It appears as though he did not stay. 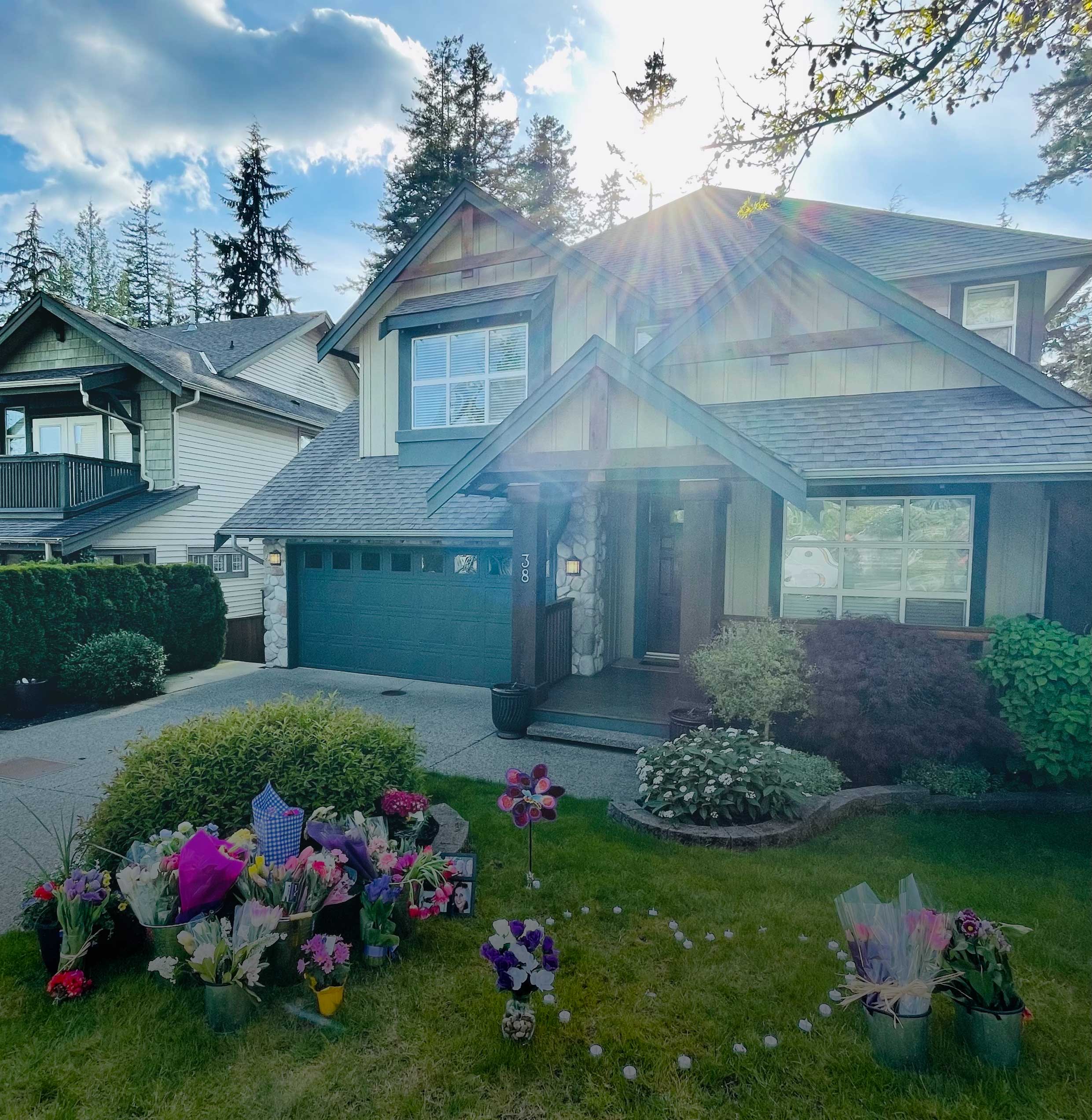 Multiple news outlets, including GlobalTV & CTV News arrive at Trina's home and report updates and the flowers being left. 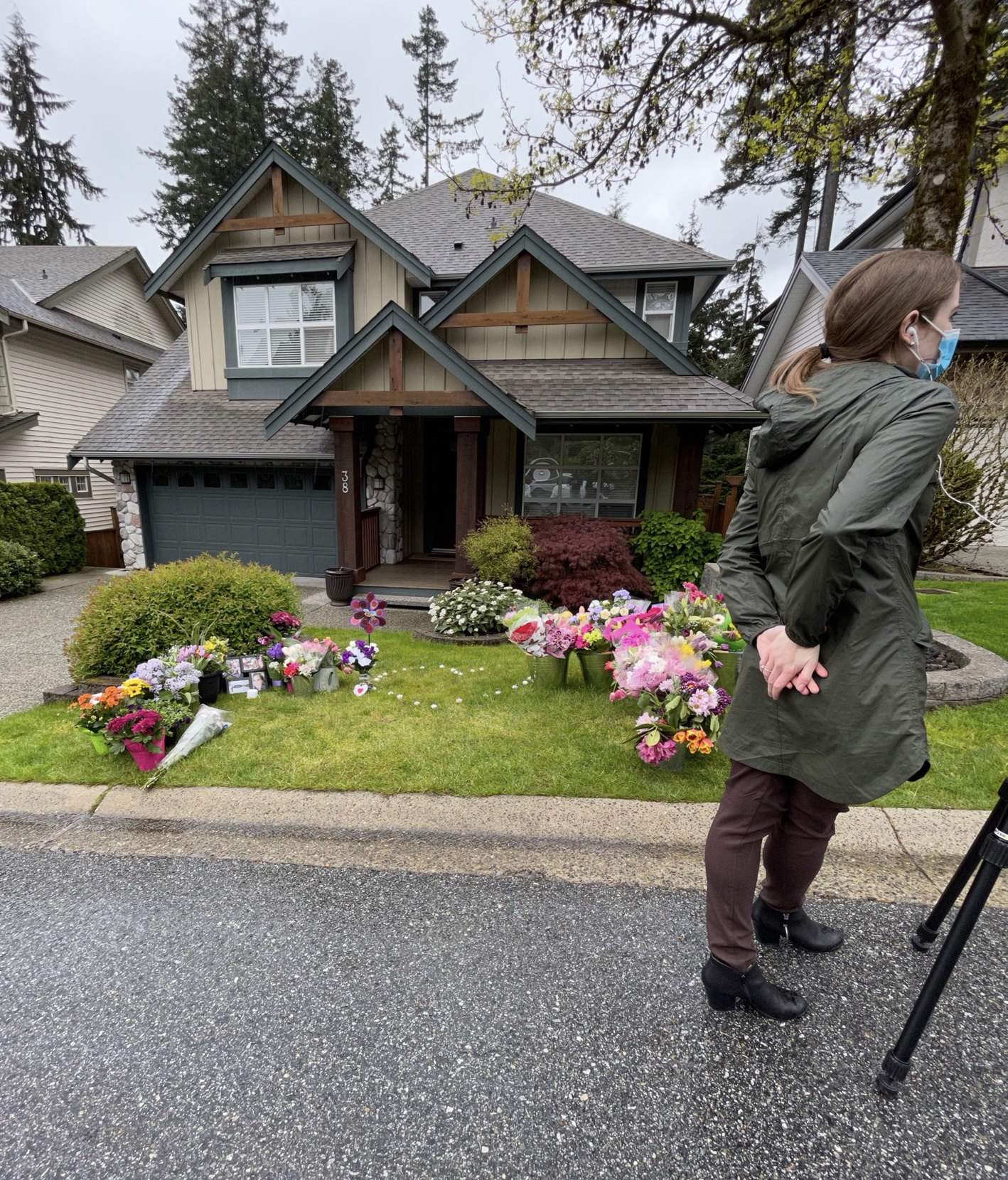 Iain and his father arrive around 2:40pm at the family home and stay for 1 night. Iain is seen arriving with a duffel bag. 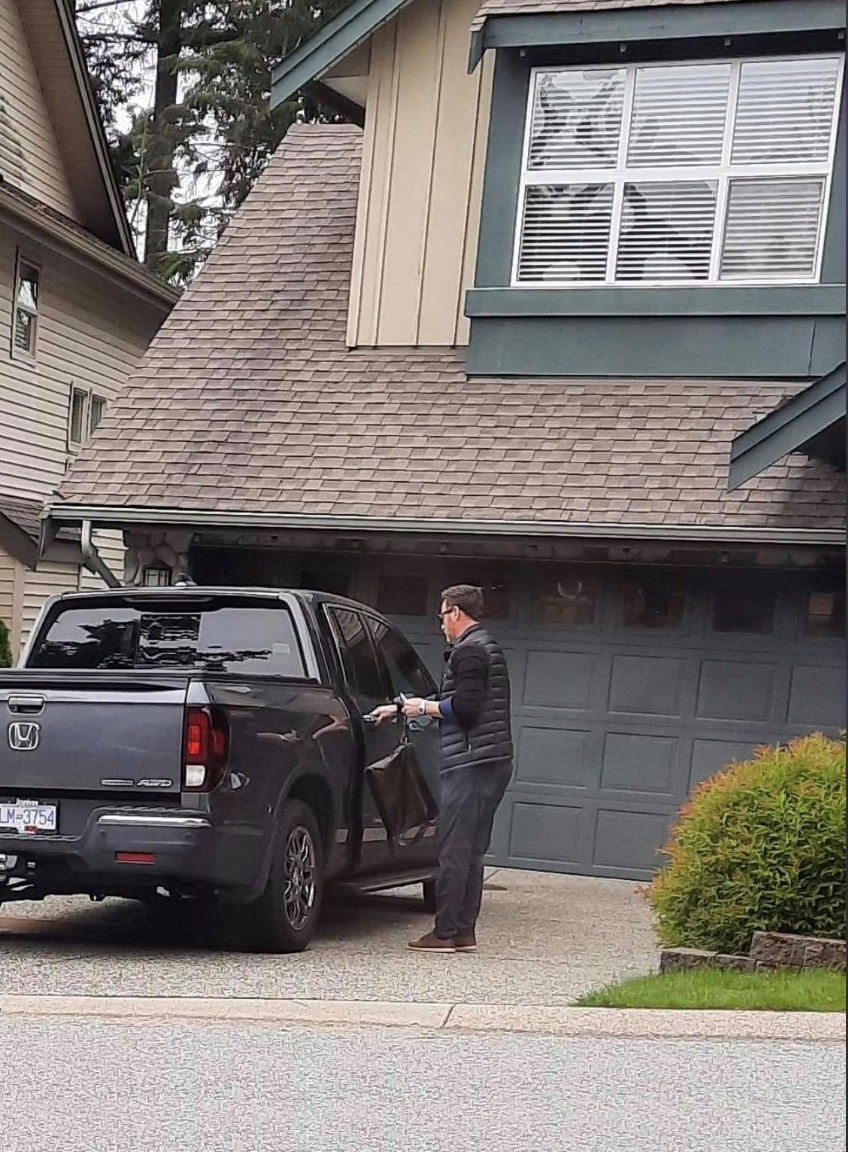 UPDATEThe rumour from the weekend of May 1st has been removed. IHIT confirmed that no-one is in custody, yet. Sgt Frank Jang reported that "We are working extremely hard on that investigation. It's an active and ongoing investigation and right now isn't the time for me to comment, for us to comment, on that particular case. That time may be coming soon." https://bc.ctvnews.ca/mobile/no-one-s-in-custody-not-yet-anyway-investigator-says-of-rumours-in-case-of-missing-b-c-woman-found-dead-1.5415637

GlobalNews spoke to the family of Trina Hunt for the first time since Homicide Investigators announced her body was found near Hope at the end of March. The family is shedding new light on the Port Moody woman's last movements and conversations, and they have a plea for her killer. Stephanie Ibbott, and her husband, talk for the first time, in depth, about the confusion that Iain and Trina travelling to Hope together, with no phones, only for her body to be discovered there some time later. https://globalnews.ca/video/7850519/trina-hunts-family-speaks-out-following-the-identification-of-her-body 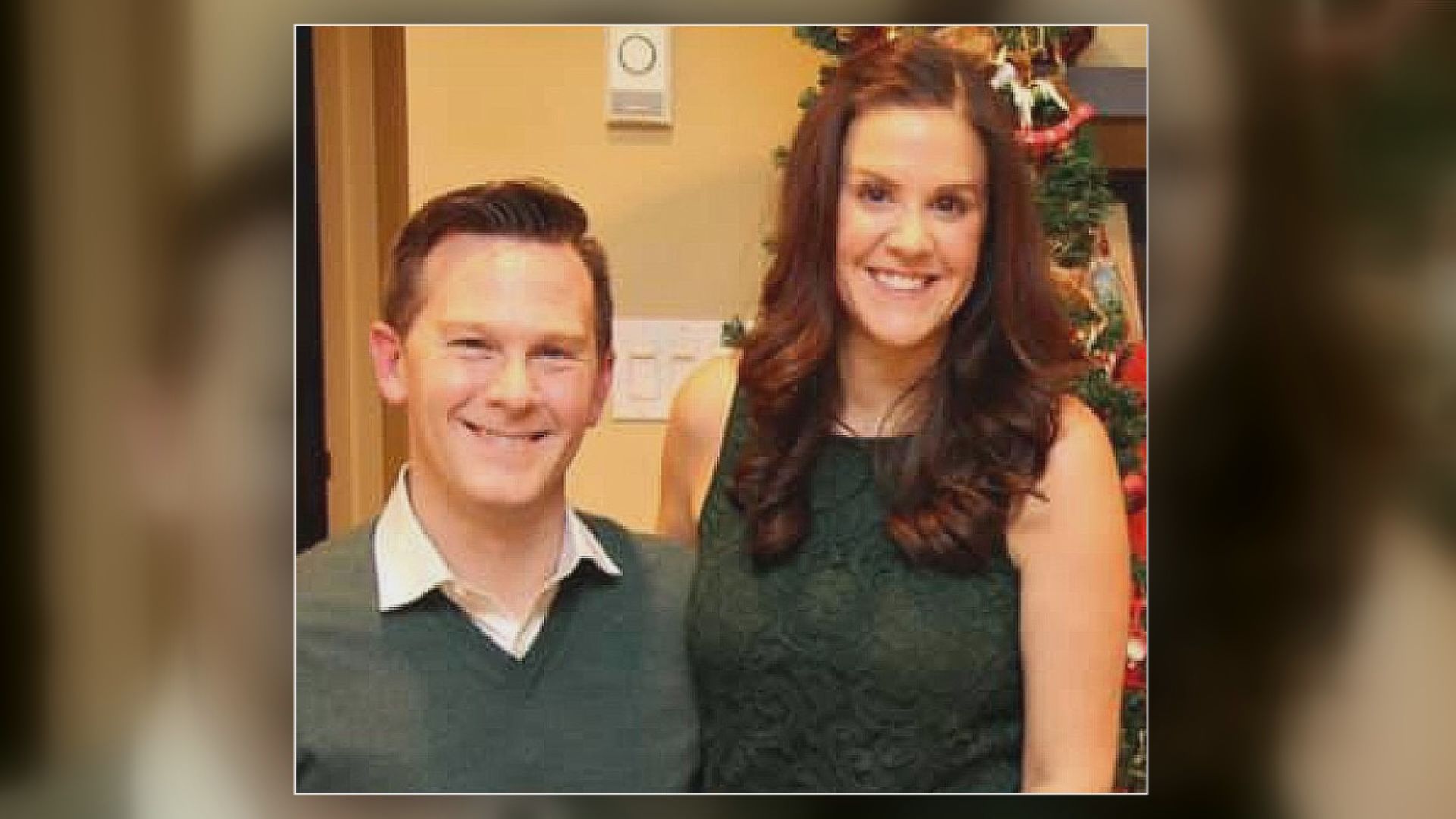 Trina's family announce a $50,000 reward leading to the arrest and charges laid in the murder of Trina Hunt

IHIT and Port Moody police conduct simultaneous search warrants at Trina's home, and Iain's parents home where he has been residing for much of the time since Trina disappeared. Police have been seen conducting forensic 3d scanning, removing of many objects including mail/paperwork. It is unknown at this time if Iain Hunt has been arrested, but it is likely given the scope of multiple broad search warrants on both properties 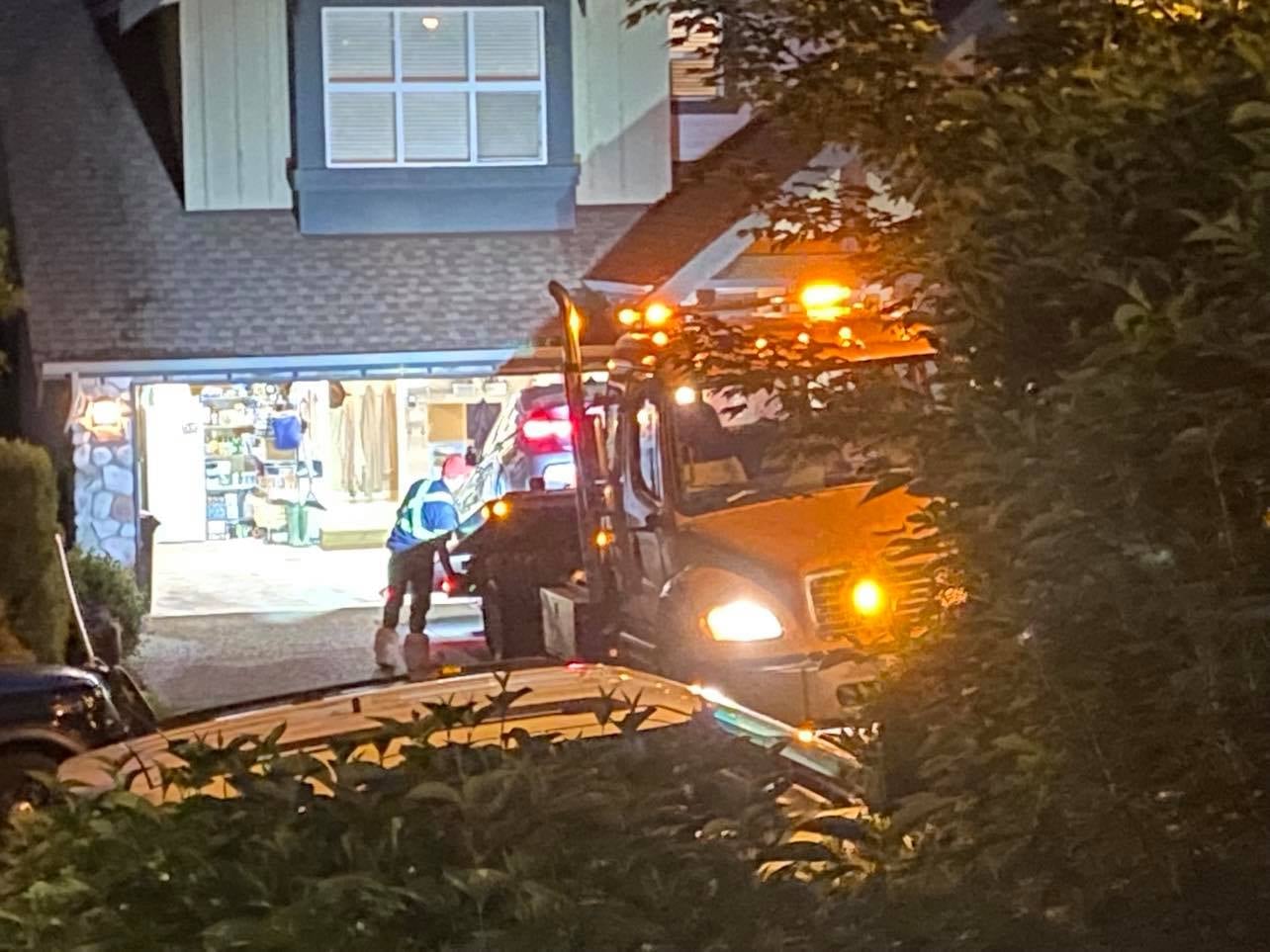 Today would have been Trina Hunts 49th Birthday 💜 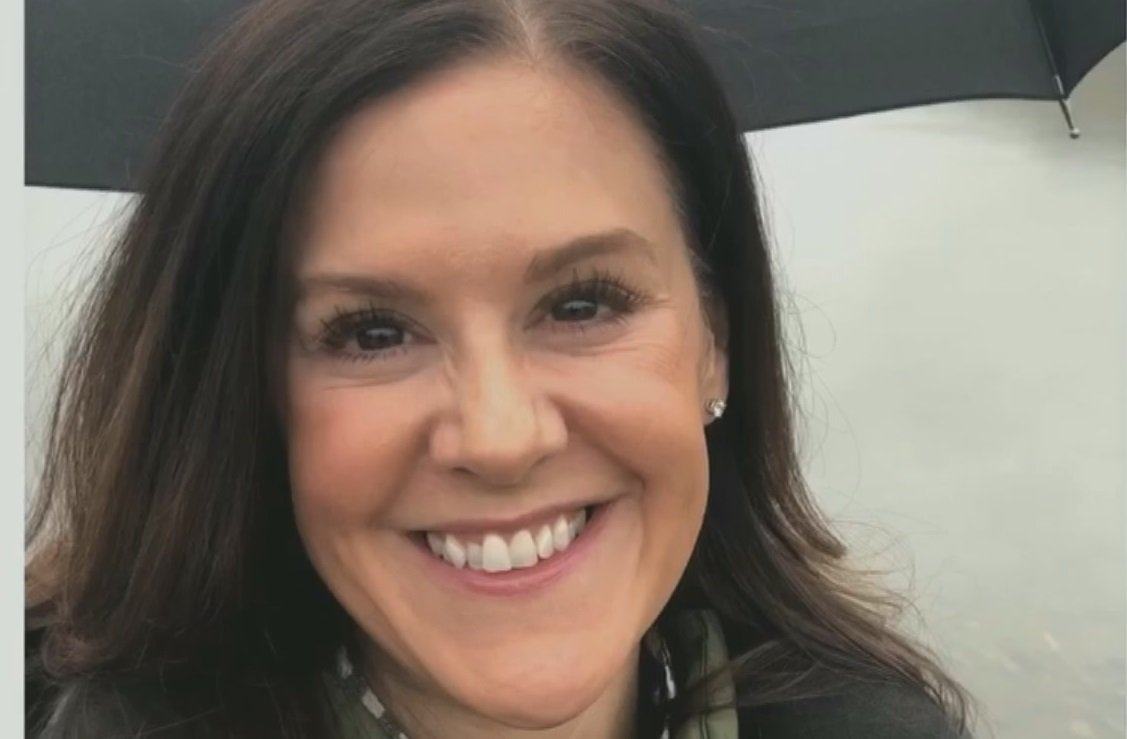 Hundreds of people hours, checking on sources and verifications have gone into creating and ensuring this timeline is accurate, if you reference any, or all of it, please reference TRINAHUNT.COM and link through to this website. Whilst the facts are not copyrighted, the text is. We permit any reasonable usage with fair credit to this site. 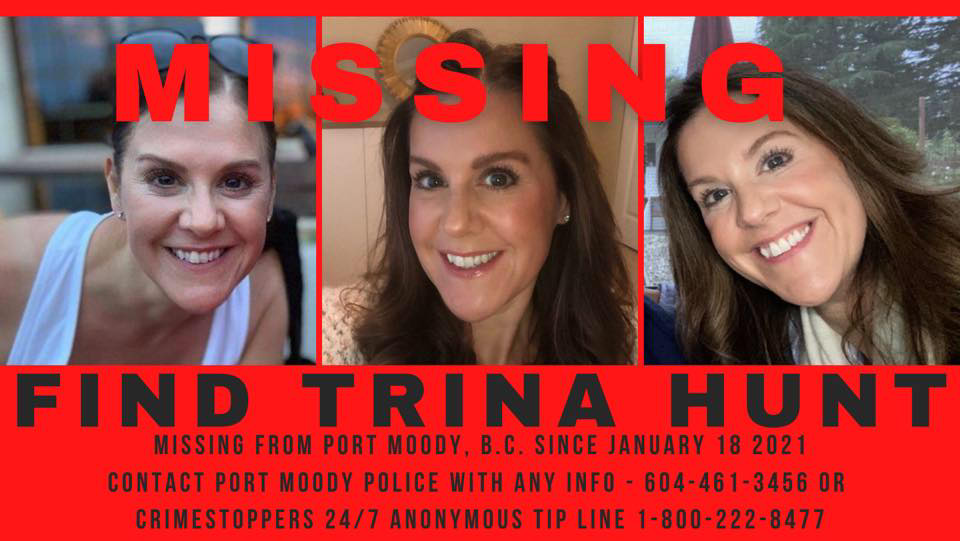 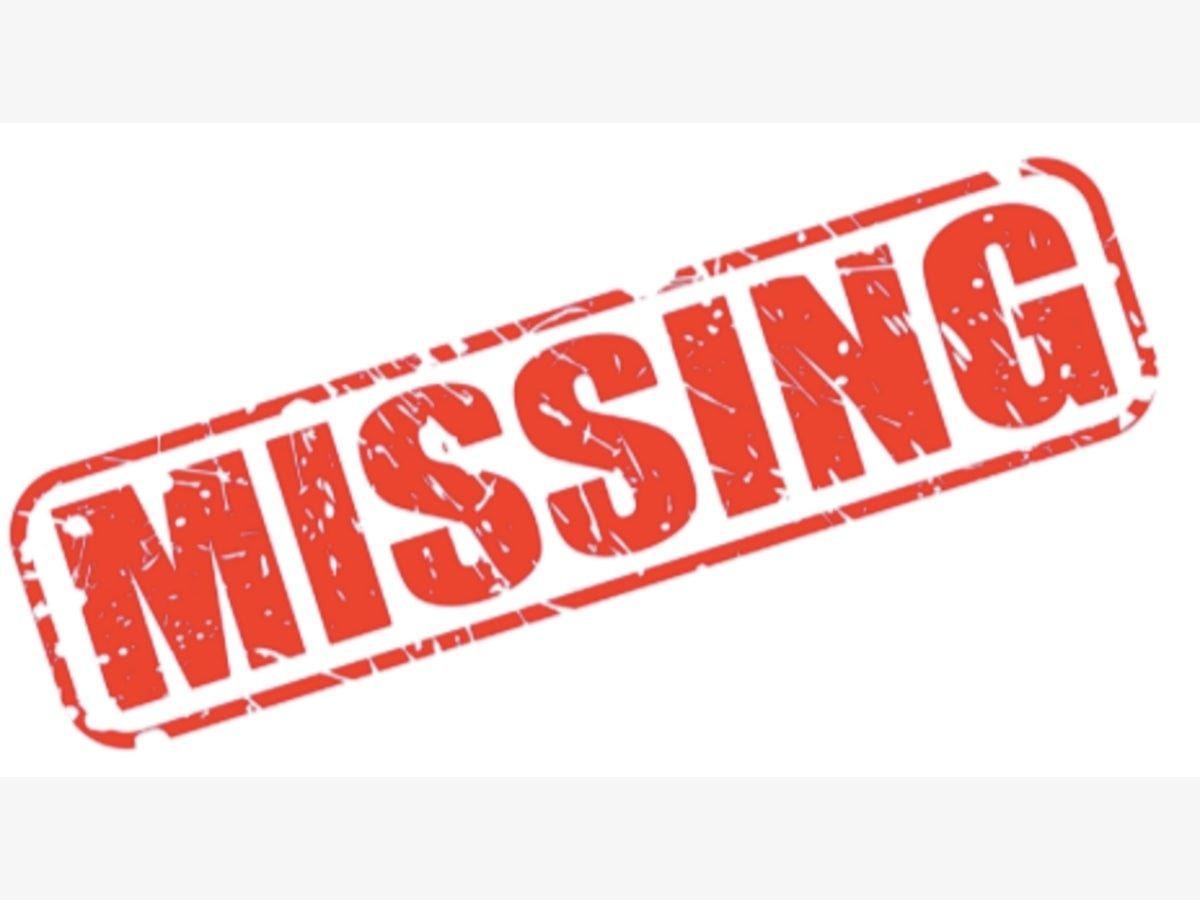 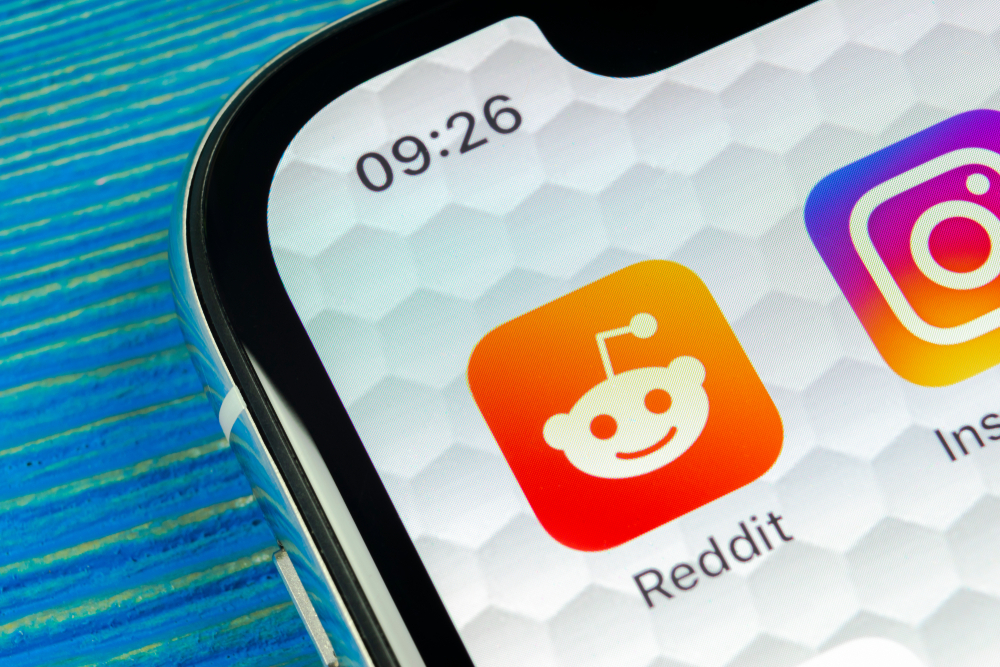 If you have any information about Trina Hunt, if you think you saw her after the 16th January 2021 in Port Moody, BC or Hope BC, please contact


Port Moody Police at 604-461-3456, or
Crime Stoppers to remain anonymous at 1-800-222-8477
This website is not operated by Trina Hunt's family, nor is associated with them in any way. The facts in this website are believed to be correct at the time of publication. TrinaHunt.com is maintained by a small group of dedicated people that want to find out what has happened to Trina, and will never let Trina's memory be forgotten.
Web hosting and design has been done free of charge and kindly supported by 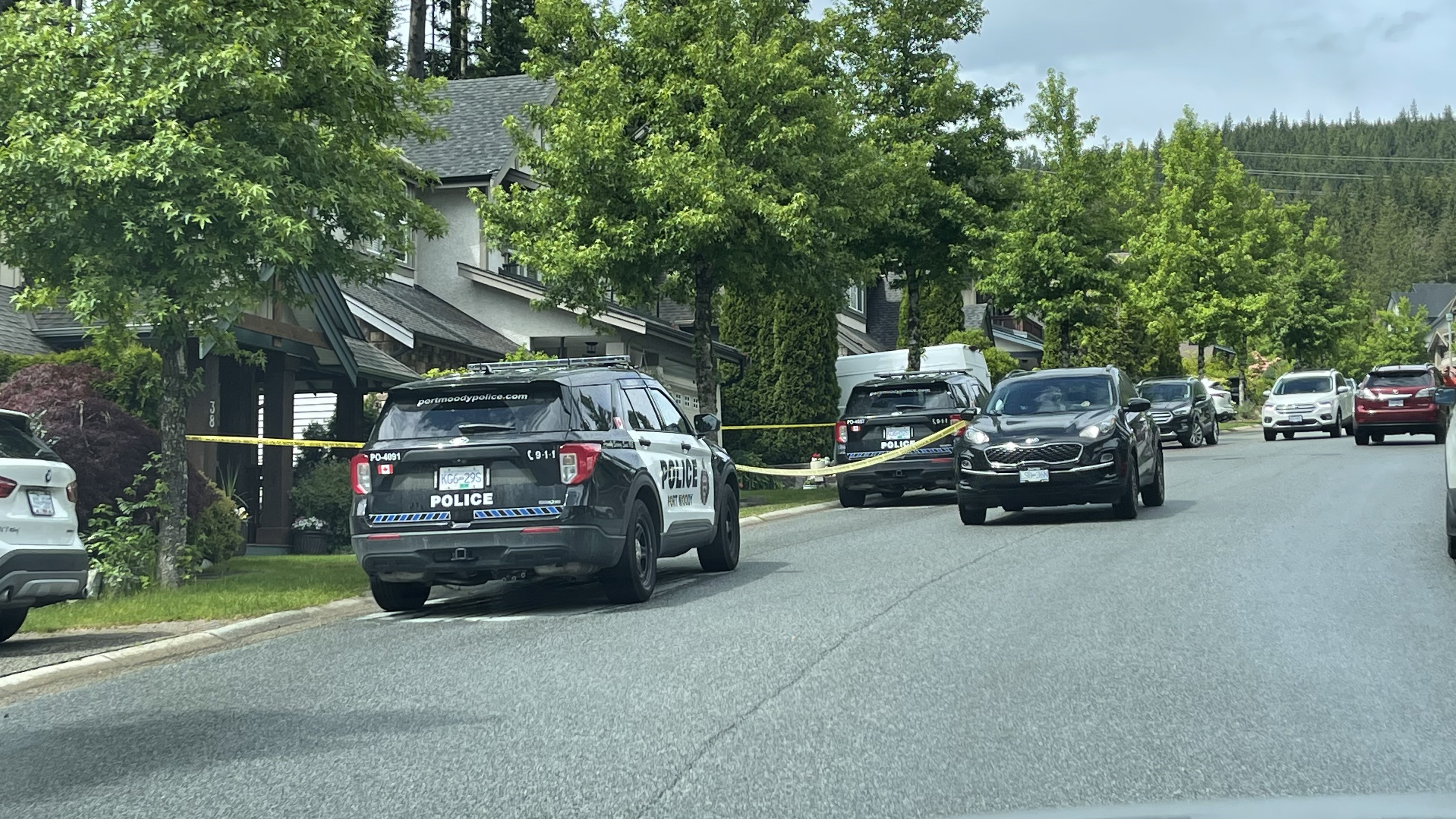